Dominican College Wicklow has a proud tradition of promoting hockey as an extra-curricular activity. This tradition is a long standing one, which stems from the period during which the college operated as a boarding school.

As in all of our extra-curricular activities we work under a philosophy of inclusiveness. Students of all ages and abilities are welcomed and encouraged to play. The hockey season extends from September to February and training takes place for an hour every week after school (3.30pm-4.40pm/4.10pm-5.10pm)

All teams are entered in the Leinster Schools Hockey League which facilitates home and away matches against a large number of schools throughout the province.

The first year league is based on an informal 8-a-side game. Matches are played on half a pitch and are designed to provide a fun environment in which to learn and develop key game skills. From second year onwards all the competitive matches are played with 11-a-side on the full pitch.

The hockey coaches in Dominican College are Ms Carthy and Ms Cremin and they are supported each year by the hockey captain and vice-captain who are selected each year from the senior team. 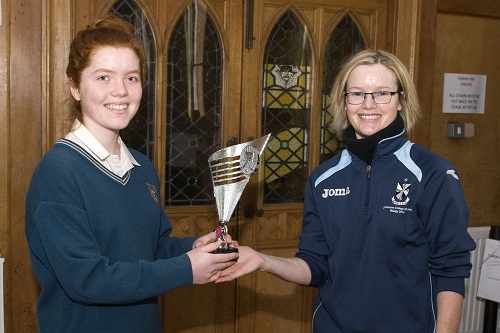